About Us » Board of Directors

Bill is currently Co-Chair of the law firm Mayer Brown's M&A practice in the Americas. He concentrates his practice on mergers and acquisitions. Bill was recognized by Chambers USA (2010-2016) as one of the top Corporate M&A lawyers in Illinois and by Legal 500 US (2010 and 2012-2015) as one of the leading lawyers for large M&A deals. Bill's two daughters attend the Community School.

A passionate, innovative, successful, organizational leader, Todd Hanna has extensive experience creating, leading, and improving organizations in the for-profit and non-profit environments. In addition to his executive experience, Todd is a decorated military veteran, having served two combat tours in Iraq as an officer in the United States Marine Corps. Todd has led teams and organizations of all sizes and across multiple industries, including real estate, nonprofit, education, arts, venture capital, financial services, construction, online publishing, and consumer package goods. In addition to his operational and executive leadership roles, he has served as a board member of several for-profit companies, has been Venture Partner at an early-stage venture capital fund, and has led and served on dozens of non-profit boards.

Todd has been formally recognized for his leadership throughout his career, and the organizations he has led have received awards such as “Best Place To Work”, “Fast 50”, and awards for vision and execution. He is a graduate of the National Outdoor Leadership School, is a former Outward Bound Veteran Instructor, and was an “Austin Under 40” award winner. In addition to his professional pursuits, Todd is a passionate outdoor adventurer, having climbed, hiked, biked, and paddled all over the country. He lives in Jackson Hole, WY with his wife and two teenage sons. His son Dillon is currently attending the Jackson Hole Community School.

Liz King joined the JHCS Board in 2015. Before moving to Jackson in 2007 with her husband Andy and their three boys, Liz was an Associate Professor of Geology at Illinois State University. She received her BA from Carleton College and an MS and PhD from the University of Wisconsin in Madison. In Jackson, Liz currently is Development Coordinator at Teton Literacy Center and teaches online Geology courses. Liz also serves on the board of Geologists of Jackson Hole. Liz and Andy’s oldest two sons attended JHCS. She enjoys biking, hiking, skiing and playing the oboe.

Mary and her family, Bill and Ethan Kolasky, moved to Wilson in 2015 from Washington, D.C., after many years of vacationing in the Valley.  Mary has decades of experience with the in-house practice of law including as Senior Vice President, Deputy General Counsel at both Verizon Communications and AR Global, where she was responsible for litigation. She graduated from the University of Chicago Law School in 1991, where she was a member of the Law Review.  After law school, she clerked for the U.S. Court of Appeals for the Fifth Circuit and the U.S. District Court for the Eastern District of Louisiana, and practiced at various law firms. She has a Master of Arts degree from the University of Chicago, and her undergraduate degree from George Washington University.

Mary is passionate about space and astronomy, Greek archeology and classical literature, the importance of life-long learning, and her shepherd-mix, Tag.  Her son, Ethan, is a proud member of the class of 2019.

Amanda ‘Amy’ Bryan is an active volunteer in Jackson. She moved to Jackson in 1991 for the summer; and found this extraordinary valley the perfect place to stay. Amy has volunteered and served on many boards including St. John’s Medical Center Foundation, The Children’s Learning Center, Jackson State Bank and Trust, Wells Fargo, Teton Literacy, and has volunteered extensively at TCSD #1. Currently she also serves on the Dancers’ Workshop board. Amy and her husband, Bomber, have three children who have or are JHCS alums. Amy’s passions include education, environmental conservation, and the arts. Amy holds a BA in Biology and Human Development from Colby College.

Mike Eden joined the JHCS board in 2016. Mike is the Market President for First Western Trust with a focus on Wyoming trusts. He moved to Jackson in 2000 with his wife, Diana and their two children. Their son, Henry Eden, was a 2014 graduate of JHCS. Mike is active with a number of not for profit organizations including Interconnections 21, Silicon Couloir and Habitat for Humanity. Originally from Cincinnati, Ohio, he graduated from Indiana University and spent the first part of his career with Marriott International in the senior housing business. Outside of work, Mike loves to fly fish, golf and hike and bike the pathways and trails of Jackson Hole. 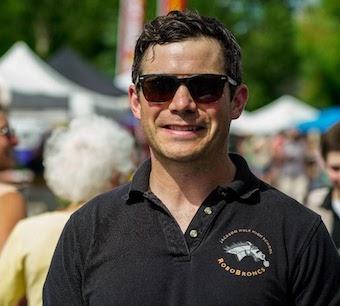 Charlie Hagen grew up in the valley, and was among the first class of students to be accepted to JHCS. Charlie values education, and the opportunity it provides – especially to small communities. After moving to Vermont, and earning a B.S. degree in Engineering, Charlie studied Consumer Behavior at the University of Helsinki in Finland. Opportunity aligned with a perpetual thirst to be outdoors, and returned Charlie to Jackson, via the manifestation of Square One Systems Design. At Square One, Charlie is part of a small team who design, build and commission scientific apparatus for the global, high-energy, physics community. When not in the lab, the woods or on his bike, Charlie can be found honoring, and understanding, his own mentors by coaching, tutoring, mentoring and volunteering.

May Herr moved full time to Jackson Hole in August of 2018 after living in the San Francisco Bay Area for 25 years. She grew up in New England after emigrating from the Philippines. May received her BA from Boston College and her MHSA from The University of Michigan. After working in quality and operations management in hospitals and health care consulting, May has been an active community and school volunteer, and looks forward to contributing to organizations in the Jackson Hole community.  She and her husband, John, have twin daughters (class of 2021) at JHCS, a daughter at Vanderbilt University and a son at Amherst College.

Anne has lived in Jackson for over 30 years, having been raised in Boston. She and her husband, Len Carlman, lawyer and community activist, live in Wilson and have two children, Madeline and Reed, who are 23 and 20 respectively. Reed graduated from Jackson Hole Community School in 2019, and is a freshman at Bowdoin College. Madeline graduated from Hamilton College in 2019, and is applying to graduate programs.

Anne is the Development Director for Center for the Arts. Presently she serves on the Boards for Jackson Hole Community School and Trust for Public Land Northern Rockies division. Anne graduated from Hamilton College and later earned her Master’s in Landscape Design.

Together, Anne and her family are avid cyclists, skiers, hikers, equestrians, and river runners.

As a seasoned search professional with more than 18 years of experience, Liz has assisted more than 200 searches in higher education, for independent schools, and in the nonprofit sector, identifying and recruiting academic and administrative leaders.

Prior to joining Storbeck/Pimentel & Associates, Liz served as a consultant in the Education Practice at A.T. Kearney. Previously, she served as a search coordinator at an international search firm placing senior executives in academic and nonprofit institutions for clients based in North America and abroad.

Prior to entering the executive search industry, she held a position in the Regulatory Advisory Practice at KPMG Peat Marwick.

Liz is active in a number of community organizations. She also serves on the boards of the Teton Valley Ski Education Foundation (TVSEF) and Wyoming Stargazing. In the summer of 2018, she led the TVSEF Executive Director Search. In the fall of 2019, she managed the JHCS Head of School Search. She assists Wyoming Stargazing with board member recruitment and identifying speakers for “The World Above the Tetons” Speaker Series. She also works closely with the Jackson Hole Community School Gala Committee and Parent Association each year.

She is the spouse of a retired Naval Officer and the mother of three boys, two of whom are current students at Jackson Hole Community School. They enjoy spending time in the outdoors.

Katrina was born and raised in Wyoming and has lived in Jackson since 1988.  She attended Miss Porter’s School in Farmington, CT and then went on to attend University of Colorado in Boulder where she graduated with a BA in Psychology.  She then moved to NYC where she lived for 5 years and worked for various fashion houses in Public Relations.  She and her husband moved home to Jackson in 2006 and now have 3 kids, 3 dogs, and a hamster.  They also own Aspen’s Market, Pearl Street Market, Westside Wine, Sudachi, Suda and Square One Construction.  Katrina has been a long time supporter and adopter at the Animal Adoption Center and has dedicated her life to non-profit work since having kids.  She has been a board member of Miss Porter’s School, Jackson Hole Therapeutic Riding Association, The Raptor Center, R Park, Weiss Family Foundation and she currently serves on the Community Foundation, the Community Foundation Competitive Grants Committee, The Raptor Center Capitol Campaign, Board Chair of the Art Association, the Weiss Foundation and the Animal Adoption Center.  She also founded Jackson Hole Food and Wine to bring amazing chefs and vintners to Jackson for two festivals a year.

JHCS Board Members can access our password-protected portal here:
http://www.jhcommunityschool.org/apps/pages/index.jsp?uREC_ID=2071819&type=d